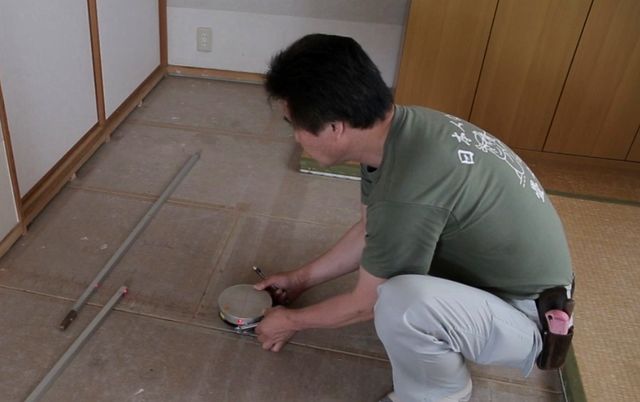 In former days in Japan, the tatami floored room was standard as a Japanese style house.

As a preparation for a new year, most houses and temples re-covered their tatami in the last days of the year.
This was the reason why tatami craftsmen were so busy in that season.

In the Edo period, even common people used the tatami.
In the last days of the year
“a rush of re-covering tatami”
tatami craftsmen in Edo town were not enough so that they called such craftsmen from other region.

In former days, most duties of re-covering tatami were done at a garden and it was so influenced by the climate.

Recently, craftsmen bring the tatami to their job place and re-covered it mostly, so there is no anxious about rain like a rainy season and people think that
“when they want to re-cover it, that is the time to re-cover it”
in spite of that re-cover it on a turning point like Obon festival days (a Buddhist event occurring from the 13th to 16th of August) or new year.

However, most Japanese people think that
“we want to welcome a new year on the new tatami”.

Current housing style is becoming like Europe and US and the tatami floored room is reducing, but still most Japanese think that
“the tatami makes us comfortable and relaxed”
and
“we want to welcome a fresh new year with a new tatami”.

The tatami is like a
“history”
to prove being with Japanese people.