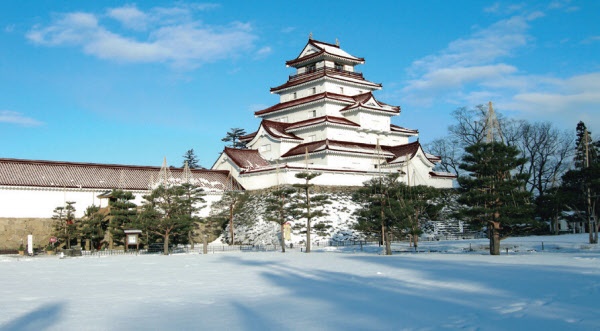 There are so many famous castle in Japan.
In this season, castles in snow areas wear snow and show them as white,
so that they can show us more beautiful views.

It has
“red tiles”
applied special medicines to avoid iced and broken.
Its contrast between unique “red tiles” and white snow is awesome.

There is a tea room called
“Rinkaku”
at a garden in Tsurugajou.
Its small Japanese tatami room was built by Shoan, a child of Senno-rikyu who called
“the Saint tea ceremony”.

Enjoying a ground green tea and Japanese sweets with traditional atmosphere is one of a good point.

Walking for 15 minutes from Tsurugajou, there is a Japanese-style garden called
“Oyakuen”.

A building on an island pond is called
“Rakujutei”.

It is a small Japanese room, the size of 8 tatami mats, but it used for various uses by political authorities at that time.

Tsurugajou will be lighted by candles and shown in snowing view.
Why can’t we miss that fantastic view?