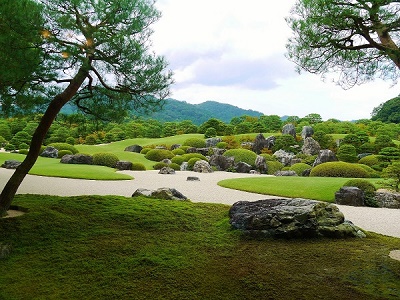 “A garden is also a picture.”

It was said by Mr. Zenkou Adachi who was a businessman from Shimane prefecture.

“Adachi museum of art”
is a museum to enjoy both Japanese traditional arts and garden opened in Yasugi-city, Shimane,
Mr. Zenkou’s hometown, in 1970.

There are about 1,500 works such 120 works by Taikan Yokohama
who is an artist of Japanese paintings in the museum.
The good news is that you can download a pamphlet in English, French and so on from the website.

At the tatami floored Japanese traditional room called tokonoma in a building in front of
“ikeniwa”
a part of the wall is cut out like a
“kakejiku (hanging scroll).
It is a
“real kakejiku”
because we can see a gardening view across the cut wall.

It is an atmosphere to feel the garden is also the picture.

At the tea room called
“juryuan”
you can enjoy looking the garden and tasting a cup of green tea and Japanese sweets.
There are Japanese rooms and tokonoma with tatamis, and historical pillars.

You can look at the garden and Japanese traditional arts.
But if you get tired, you can take a rest on the tatami.
It is possible to be there about 5 hours without realizing it.

Adachi museum of arts.
It is the best tourist spot to enjoy “Japan”.