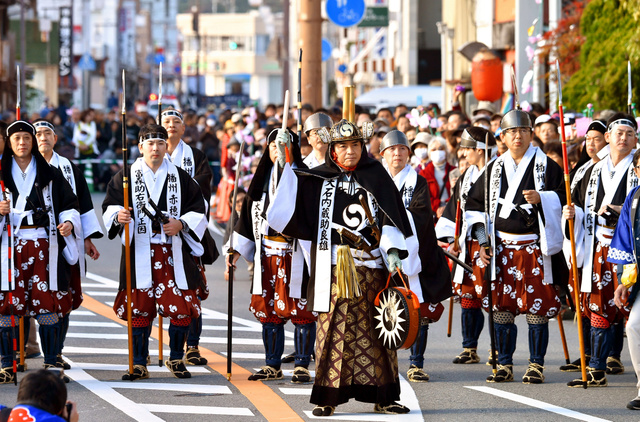 “Chushingura”
is a famous story that 47 ronins did
“Uchiiri (raid)”
to avenge their lord.
In 2013, a movie
“47 RONIN”
this story was a motif, was released so that a lot of people might know this story.

As a crime of drawing a sword at Edo-jo castle, Takuminokami ASANO was ordered seppuku
(ritual suicide by disembowelment on a sword) on the day.

Akou town in Hyogo, managed by hime, is also known as a hometown of Chushingura.

There are Kagaku-ji temple placed a grave for Gishi AKOU and
“Gishi houbutsukan (treasure house)”
exhibited his works.
And also there is Oishi-jinja shrine to enshrine “47 ronins” like a wife of Kuranosuke OISHI
who acted as the commender for Uchiiri.

There is a former residence of a wife of Kuranosuke OISHI named
“Oishi residence Nagaya-mon Gate & garden”
at the shrine.

“Nagaya-mon Gate”, knocked by a messenger about Takuminokami things, is still existed
and shows memories of Edo.

At Nagaya-mon Gate, there is a tatami floored Japanese room and dolls are exhibited on the tatami.
We can see old days from these dolls.
The stone path stretching ordinary and a garden constructed with the early Edo period style
are also view spots.

On December 14th, when Uchiiri was done
“Gishi AKOU festival”
is held every year and it’s crowded with a lot of tourists.

Akou is a town where we can feel spirits of
“Gishi”
who lived for a lord.