Fireflies light in the summer night The taste of Japanese to think of the Heian period. 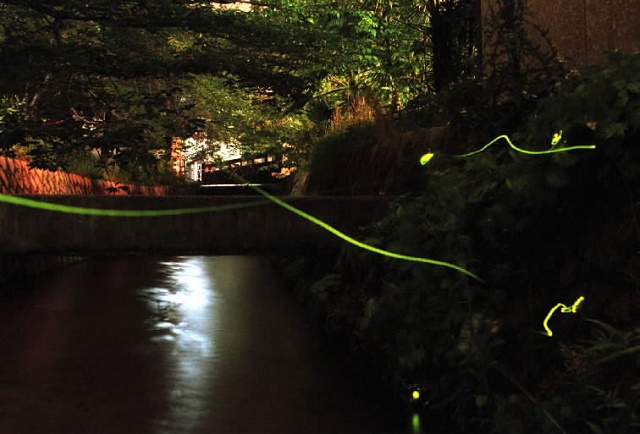 What the summer is that the sunshine is being strong,
the temperature is being high, people are being enlivened,
and comforts are desired beyond the coolness.

“The summer arrival”
is not yet in Japan, but
“Rikka (the begging of the summer in the Japanese traditional calendar)”
is coming on May 5th in 2017.

Around Rikka season in Japan, it’s mostly crisp and sunny days.
Even it’s good season to renew the tatami mat before the rainy season.

The latter half on May, the begging of the rainy season, fireflies are appearing.
They light like to burn their short life and attract people.

In the Heian period, that’s 1200 years ago, the text of
“fireflies”
were shown on historical literatures.
It was also written on
“Genji Monogatari (the Tale of Genji)”
and
“Makura no soshi (the Pillow Book)”
that were read by all generations.

We image the tatami floored Japanese room as a noble’s house, but actually the standard at
that time was the wooden floor and sometimes put the tatami for bedding or carpeting.

There is
“The Costume Museum”
in Sakyo-ku, Kyoto city, and this museum introduces lives in the Heian period
and the world of the Tale of Genji by delicate dolls and exhibitions.

In spite of speaking of the love, Japanese people in the Heian period read the poet to compare
it with the light of fireflies.
Why can’t you think of Japan of 1200 years ago from graceful and beautiful fireflies in the darkness?