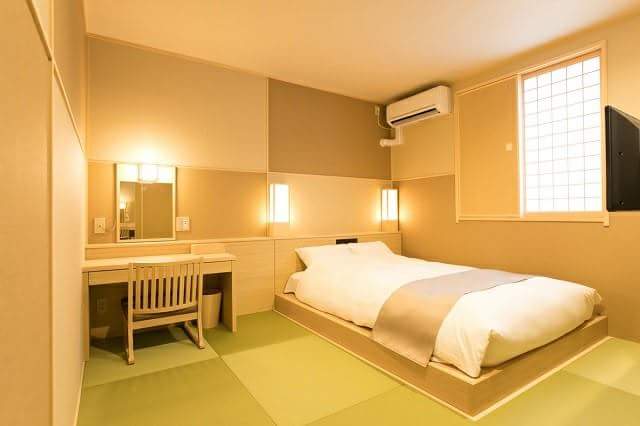 Speaking of accommodation of foreigners who stay in Japan, there are various choices
like a city hotel, a business hotel, a capsule hotel, a Japanese style inn, a guest house,
and a vacation rental.

And in addition, do you know that there is a
“Shukubo”
to stay at a Buddhist temple?

“Shukubo” is a place where a Buddhist temple accepts worshippers to stay.
Originally this facility was for priests and Buddhist monks,
but recently it accepts common visitors to stay.

On April 23 in 2017, a new Shukubo called
“Waku Shitadera machi”
was opened in Osaka.
This wasn’t delivered by specific temple, but it was opened as an accommodating facility
to experience Shukubo.

You can get touch with Buddhist culture through a tatami floored guest room,
traditional Buddhist dishes called
“Shojin Ryori (vegetarian dish)
and experiences of
“Zen meditation ((in a cross‐legged position)”
and
“Shakyo (hand copywriting sutra)”.

Originally the Buddhism is based on India, and there are several Buddhist countries in Asia.
But Japanese Buddhism is developed uniquely by connecting with samurai culture.

To feel Japanese Buddhist culture is to know the spirit of Japanese culture and
samurai culture deeply.

If you visit Japan, why can’t you stay at “Waku Shitadera machi” in Osaka?