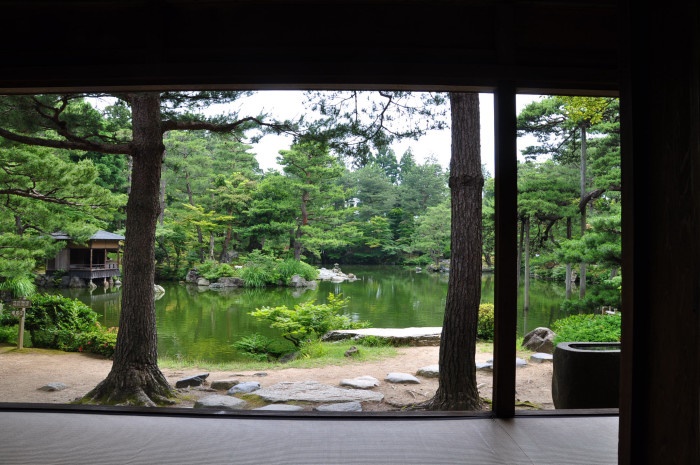 Shibata City is located on the north part of Nigata Prefecture.

This city area was prospered as a
“castle town”
of the Shibata clan for a long time, and there are a lot of historical architectures like Shibata-Jo Castle.
Old paths and waterways are still remaining with former appearances.

“Shimizuen Garden”
is
“a unique famous garden into the Northeastern area from Echigoji”.
This garden took twenty-third places in
“Japan Garden Ranking 2005”
at a journal of Japanese gardening in the US named
“Journal of Japanese Gardening”.

It is marvelous view to see forever from the verandah of tatami floored
“Shoin (drawing room)” .

Shimizuen Garden has different tastes of five tea rooms to show the history of Shibata
where has been popular for chanoyu (Japanese tea ceremony) from the past.
There are calmed and very Japanese appearances
“Kirian”
with tatami floored corridor,
“Dojinsai”
that is a room with twelve tatami mats faced on a pond, and so on.

Unfortunately, the inside of tea rooms doesn’t open to the public usually.
But sometimes it’s opened for a limited period, so we have to check it.

In Shimizuen Garden, there is
“Ishiguro house”
that is a “standard” samurai residence at the end of Edo period.
The detailed condition of that day is on the verandah, the shoji (a paper sliding door),
and the tatami floored Japanese room.

And also it is a recommendation to visit
“Ashigaru-nagaya”
that is located on the road across the river.
This is a very rare remain in Japan as a house to show the lifestyle of
“lower samurai”
called
“Ashigaru”.

There are only two rooms; a wooden floored room and tatami floored Japanese room with six tatami mats.
We can re-feel that
“samurai”
who had a katana (Japanese sword) was existed in the past and they supported the history of Japan.

Echigo Shibata is an exotic historical place.
Why can’t you visit here to experience a castle town?