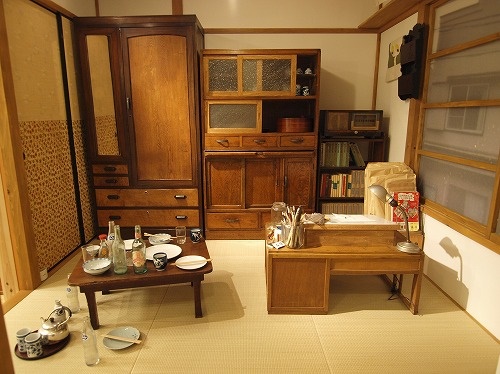 These are comics drawn by a comic artist Osamu TEZUKA who called
“the God of the comic”
in Japan.
These representative works are published in English so that some of you might know these works.

Mr. Tezuka was from Takarazuka City in Hyogo Prefecture.
But he moved to Tokyo in 1952, and next year, he had started to live at
“Tokiwa-so”
that was a two-storey wooden apartment.

There were ten tatami floored rooms on the second floor, and the area of all rooms was four and
a half tatami mats.
Mr. Tezuka drew several historical works on the tatami at Tokiwa-so.

After Mr. Tezuka, many young comic artists lived at Tokiwa-so and most of them brilliantly succeeded.
This was a famous story so that Tokiwa-so was called
“Manga-so (comic-so)”.

In 1982, Tokiwa-so was dismantled because of deterioration.
But currently at this used place, there is a monument that figured a former building,
“Tokiwa-so street ’s rest stop”
that is an exhibition, rest, and sale of goods space to reproduce former rooms is opened, and
many fans visit here as a
“Holy place of comics”.

And also for Tokyo Olympics in 2020, it’s decided that a building will be built to completely reproduce
the former exterior at a ward garden where takes three minutes to walk from the used place.
Various documents, comics, and cartoons will be exhibited on here. It’s sure that here will be
a place to be able to feel histories and passions of many comic artists who created their works
on the tatami like Mr. Tezuka.

You can lie on the tatami and read popular works created on the tatami.
We recommend such a very Japanese style to enjoy!