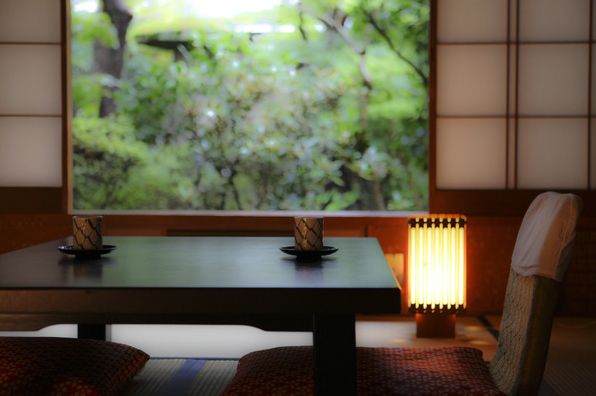 Issa KOBAYASHI, a haiku poet representative the Edo period, was born in a farmhouse
in the north part of Nagano Prefecture in 1763.

When he was 25 years old, he met and attracted with haiku.
His works are very warmful; he loves small things without discrimination.

He wasn’t known well during he was living.
But in the Meiji Period, Shiki MASAOKA highly evaluated his works, and then he was payed attention.
He is timeless and widely loved as a handed down haiku poet till now because of his penetrating
insight to the nature with the climate and his choice of simple words.

Amazingly, he remained 22,000 haikus in his life.
This number is overwhelming if it’s compared with the number of 1,000 poets,
which were done by Basho MATSUO who was a famous haiku poet.

“Yutanaka Yumoto”
is an old inn in Shimotakai District, Nagano Prefecture that has 350 years of history.
This site is famous of originating inn for Issa, and there is
“Toukuntei”
the smallest museum in Japan that has two Japanese rooms with eight tatami mats.

In Toukuntei, precious works written by Issa are exhibited.
Also, it exhibited works by Seisensui OGIWARA.

He was impressed by Issa’s works and invested these works, but on the other hands,
he achieved as a haiku poet.

“Yutanaka Yumoto” has five guest rooms, and all these are the tatami floored calming Japanese room.
All rooms are facing to the garden, so that guests can be relaxed on the tatami and healed by the view.
In the coming season, guests can see fireflies.

In the silence, there are the world and charms of Issa’s works.
A small accommodation in Nagano with the Japanese taste can be called Japanese “luxury” space.