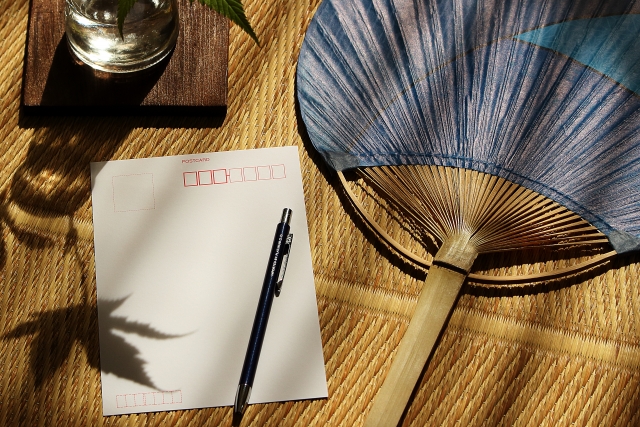 Recently, the cell phone and the computer have been developed, and a lot of easy and quick
“communication tools”
has been appearing.
But on the other hand
“the letter”
isn’t being common little by little.

However, there are customs sending a seasonable letter or a card to familiar friends and
to write and send a recent situation on a postcard that shows details of a journey.
Each country has them in each style as “culture”.

At the beginning of the summer in Japan, there is a custom to send
“the summer greeting card”
to take care of close people as it has done since Edo Period.
At that time, people visited their familiar friends to take care in the summer season.
But in the Meiji Period, it had been common and spread to send a letter or a postcard
by the developments of posting the service.

Though the time has been moved and the society has been systemized
“the root”
of the letter hasn’t been changed to put own heart by writing each letter.
There are warm feelings in both writers and receivers of the letter.

This coming summer in Japan is suitable with the Japanese room, the fan, and
the mosquito coils all the time.

It is protective and important Japanese traditional culture like the tatami and
the Japanese room to know the recent situation of familiar friends and
smile with it while lying down on the tatami and feeling nice and cool.