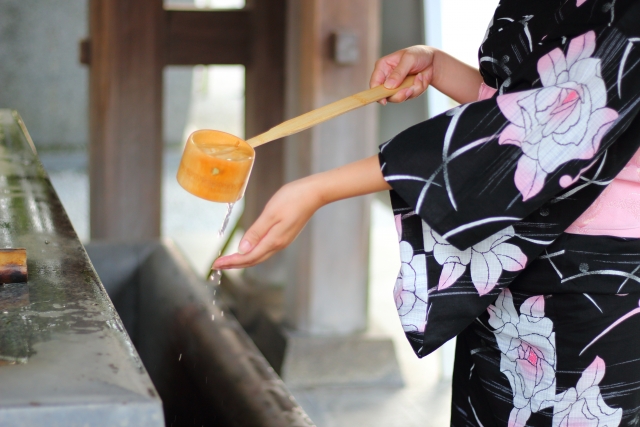 Yukata was originated in
“Yukatabira”
that nobles wear it when they took a steam bath in the Heian Period.
This is cheaper and easier to wear than the normal one, so that this is the quick kimono that is popular for young people and
tourists from abroad.

Most people might know it as a symbolism of the Japanese summer that is necessary for the festival and the fireworks display.

Yukata was originated to wear it during taking a bath, and then, it was permeated to wear after the bath at home.
As time passed again, it was spread as
“the summer wear”
to wear both inside and outside the house.
Because it is murmuring and good feeling to wear, many people wear it instead of the pajama to sleep.

It helps to spend the better night in the Japanese hot summer.

And also at hot spring spots, it’s able to go out with yukata, so that people can enjoy strolling with the Japanese traditional atmosphere.

The Japanese summer and yukata are able to experience the traditional culture comfortably and easily.
Why can’t you go to the town in the evening with yukata?