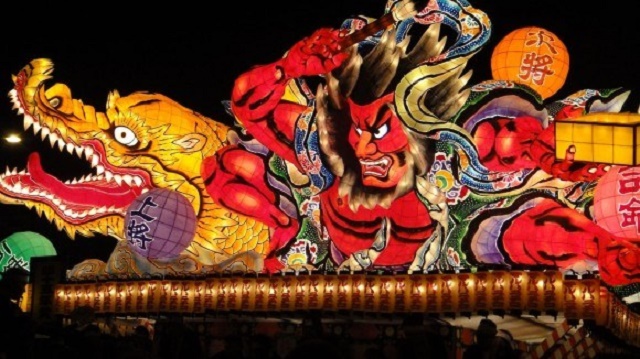 Aomori Prefecture is located in the northernmost region on the Japan island, and
it’s surrounded by the Sea of Japan, the Pacific, and the Tsugaru-kaiyo Strait.
It has rich nature like the world heritage “Shirakami Mountain”, rich agricultural
and fishing resources.

“Nebuta Festival”
is a worldwide famous summer festival representative the short summer in Aomori, where is assigned to
“a heavy snowfall area”
by extreme cold and snowfall.

Even in this year, Nebuta Festival was held from 8/1 ~ 8/7.
Gorgeous “Nebuta”, that carried big decorations named Hariko, walked through the town,
and a lot of “Haneto” people, who wear Hanagasa on their head, Zori (Japanese sandals),
and Yukata, shouted
“Rasse-Ra! Rasse-Ra!”
and jumped around Nebuta.
There were loud voices and heated atmospheres in the summer night. 3,500,000 tourists came and visited there.

Aomori Nebuta as experiences to be sent to France, Italy, Hawaii, and China to encourage worldwide festivals. Everyone is attracted by this overwhelming power in the summer night.

There isn’t only Nebuta Festival in Aomori Prefecture, but also it’s an attraction to see beautiful views
of the sea and sceneries anywhere.
“Senjoujiki Coast”
in Fukaura town has a legend that a lord of Tsugaru puts 1,000 tatami mats and held a drinking party there.
There are large ledges look like the same size as 1,000 tatami mats or more than it.

During the summer season, a lot of sea-bathers come and visit this coast to enjoy sea-bathing and camping.

There is a glorious festival, the sea, and marvelous views.
Aomori has a lot of “Japanese traditions” in the summer season.