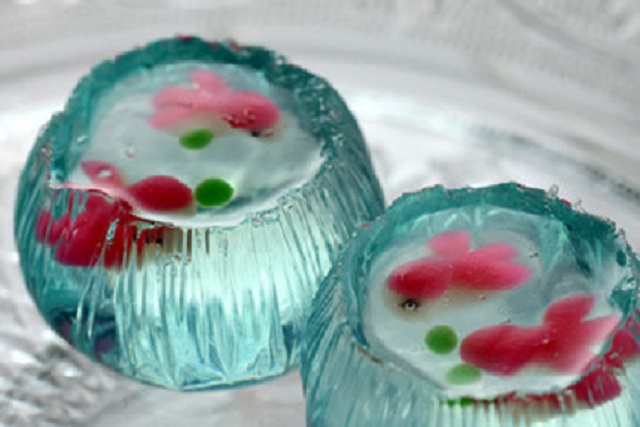 “Japanese sweets”
is characterized by refined sweetness, made from “Anko” (made from azuki beans), Kinako (roasted soybean flour)
and sugar, and its beautiful looks.
It was called
“Nihon-Gashi (means Japanese sweets)” before.

In contrast to Nihon-Gashi, sweets from Europe after Meiji Period was called “You-Gashi (means Western sweets)”.

Usually the Japanese sweets are suites with “green tea”, so that it deeply related with tea-ceremony
that is a traditional culture in Japan.
Some of you might see pictures or movies of the tatami floored tea room, the green tea in the tea cup,
and the Japanese sweets.

Also the Japanese sweets are deeply related to the seasons.
So you can enjoy its elegant taste, and its seasonable and beautiful looks.

They have been changed by every season.
Japanese sweets chefs have put their skills and delicacy to each one.
During the midsummer season, various
“Ryoka (Japanese summer sweets)”
have been appearing; for example, there are swimming gold fishes, made from the sugar,
in the goldfish bowl, made from the Kanten (agar).

People want to spend as little cooler as possible in the hot and humid Japanese summer.
The seasonable Japanese sweets should be tasted on the tatami floored Japanese room
to be relaxed with the green tea and the handy fan.
It’s the most luxury things to feel Japan.

If you visit Japan in the summer season, why can’t you taste the Japanese summer sweets on the tatami?
Its elegant and sweet tastes and beautiful colors will relieve humid hot.