Feel the romance of the Sengoku Period Nagoya-jo Castle in karatsu, Saga, and Jinya-ato Ruins 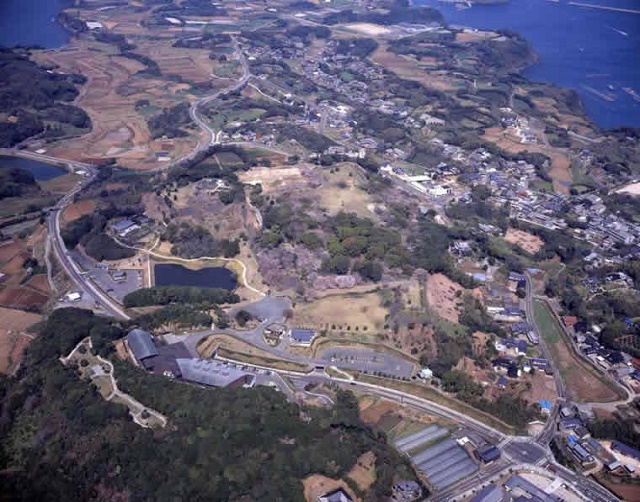 In the Sengoku Period, a lot of samurais, who remain their names till now, were active. Hideyoshi TOYOTOMI
was a famous one in them.

Having finished the unification inside the country, Hideyoshi turned his eyes overseas. In 1592,
he sent soldiers to the Korean Peninsula.

Nagoya-jo Castle, located in Karatsu city, Saga Prefecture, was built at that time. Nagoya-jo Castle
was a base of the invasion of the Asian continent from 1592 to 1599.

Total area of Nagoya-jo Castle was about 17 hectares.
Following the Osaka-jo Castle, it was the second largest castle in Japan.

More than 250,000 people gathered around the Nagoya-jo Castle, and encamps called
“Jinya”
were built there.

The number of Jinya was about 160,
and about 130 of them were confirmed in the current.
23 Jinya buildings were designed as the national special historic site, and they have been preserved
and maintained carefully with the Nagoya-jo Castle ruins.

It wasn’t only the castle tower, Nagoya-jo Castle had the
“Honmaru (donjon)”
with the large hall as large as 300 tatami mats.
Hideyoshi himself stayed there about one year.
You will feel the romance to imagine that people, who made the afterworld like Ieyasu TOKUGAWA,
Masamune DATE, and Toshiie MAEDA, sit on the tatami floored large hall and raised their spirits
against the war.

It isn’t only Nagoya-jo Castle, Karatsu has a lot of tourist spots like
“Yobuko Morning Market”
that is famous by the fresh squid
“Yobuko Oohashi”
that is harmonized with the wonderful view, and so on.

There are the history of the samurai, the nature, and the seafood.
Please come and feel the magnificent Karatsu.