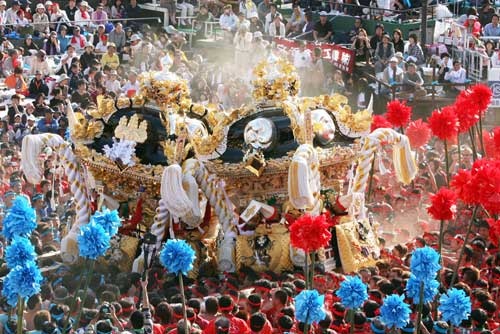 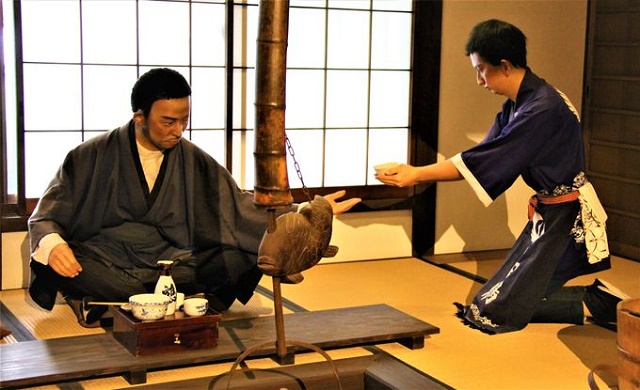 It means
“Nada Fight Festival”
held in Himeji city, Hyogo Prefecture every 10/14 and 10/15.
This festival gathers more than 150,000 tourists, and its viewpoint is
“fight”
that hits Mikoshi (portable shrine) and stands.

It’s believed that the more Mikoshi and stands are broken, the stronger respects to the God it will show.
So if it hits harder, people will give a glad shout more.

Neighbor towns are just a festival mood.
Sounds of a shout and Ohayashi (Japanese orchestra) echo throughout the sky in Himeji till the late night.

In Nada, famous sake breweries like
“Hakutsuru”
and
“Kikumasamune”
are lined up, and it’s able to make a tour of sampling the sake, and to visit the museum, the memorial hall,
and so on.
So a lot of tourists from abroad who are interested in the sake visit here.

“Hakutsuru Shuzo Shiryokan (Hakutsuru brewery museum) ”
is able to see the process of making the sake by dolls.
Speaking of the Japanese sake, it’ll be the tatami floored Japanese room.

Some dolls sit cross-legged on the tatami, and seriously reach their hand for the sake cup.
“Kikumasamune Shuzo Kinenkan (Kikumasamune brewery memorial hall) ”
has a profound gate to show the traditions and the history of them.
Amazingly, the old memorial hall was rebuilt from a brewery that built in 1659.

Though it was destroyed by the Great Hanshin Earthquake in 1995, it had a revival open in 1999
to show a passion for the sake and to make the marvelous Japanese sake.