The autumn leaves, like the paintings, from the Japanese room The silent autumn in Chouju-ji Temple, Kamakura 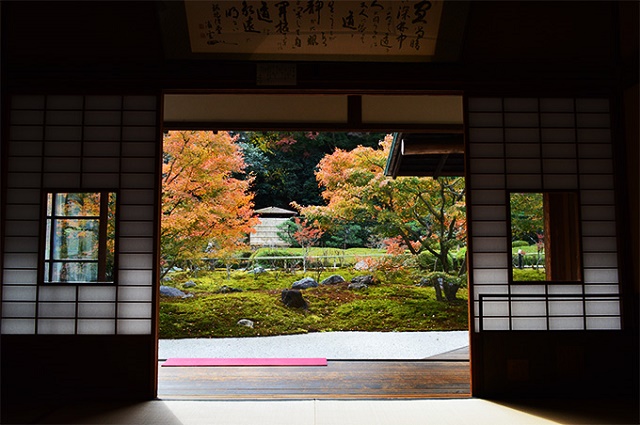 Japan has four seasons, and there are entertainments for each season.
These are not only for Japanese people, but also tourists from abroad to Japan are attracted very much.

Now, the season for the autumn leaves has come all over Japan.
Seeing red and yellow colored trees from the tatami or the alcove is actually very luxury experience to
feel the nature in Japan and the atmosphere.

Chouju-ji Temple in Kamakura was built to mourn for Takauji ASHIKAGA, who was the founder of
Muromachi shogunate.
It was completely closed before, but recently, it’s opened on the weekends during the spring and
the autumn seasons.

Because of this limited open, it’s not well known for tourists yet.
So it’s able to spend silent moments there.

In Chouju-ji Temple, it’s great to see the autumn leaves from the tatami floored Japanese room
faced on the garden.
This beautiful view, like the paintings, will want to see forever.

Over the Japanese room, called
“Hojo (abbot’s quarters)
and the opened Shoji, there is the autumn.
If you take a breath of the cold air, you’ll be healed.

Kamakura in the autumn season is very suitable for strolling.
Why don’t you visit Kamakura to feel Japan?