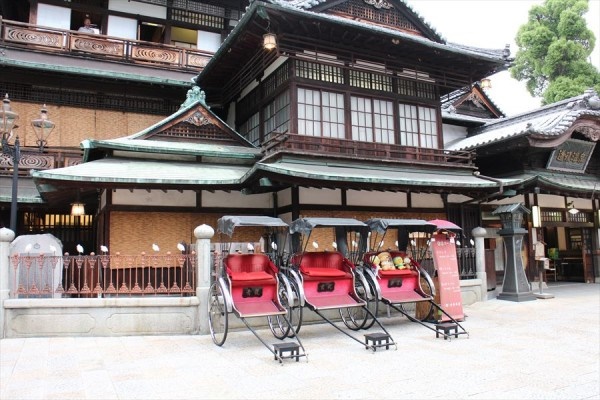 “Nihon-Shoki”
is the oldest chronicles of Japan established in A.D. 720.
“Dogo-Onsen Hot Spring”
that is located in Matsuyama city, Ehime Prefecture, is the oldest hot spring in Japan that is also
appearing in this Nihon-Shoki.

Matsuyama produced a haiku-poet Shiki MATSUOKA, and it’s a place of the novel of Soseki NATSUME
“bocchan (literally, a son from a good family)”.

Even Prince Shotoku, who was a famous politician in Asuka Era, visited Dogo-Onsen Hot Spring.
There is a public bathhouse built with a former architectural style and an inner court reappeared fulfilled camellias.
Its exterior suites with the historic townscape, but also facilities are prepared
the large bath, the open-air bath that isn’t in the famous main building of Dogo-Onesen Hot Spring,
and the special bath that reappeared the bath for the Imperial Household named
“Yushinden”.
After taking a bath, you can take a rest in a tatami floored large hall with 60 tatami mats.
Also, there are tatami floored private rest rooms that show
“legend”
of Dogo-Onsen Hot Spring, and you can take a rest in this Japanese atmosphere.

In Dogo-Onsen Hot Spring, there are traditional crafts of Ehime like the Japanese traditional paper,
the tile, and the bamboo work, so that people can feel both the history and the culture of Ehime.

From now on, you can enjoy strolling the town and the hot spring in Dogo-Onsen Hot Spring.
Why don’t you enjoy such autumn season in Japan?