Japanese culture The rice becomes a seasoning, and the rice plants are used everything 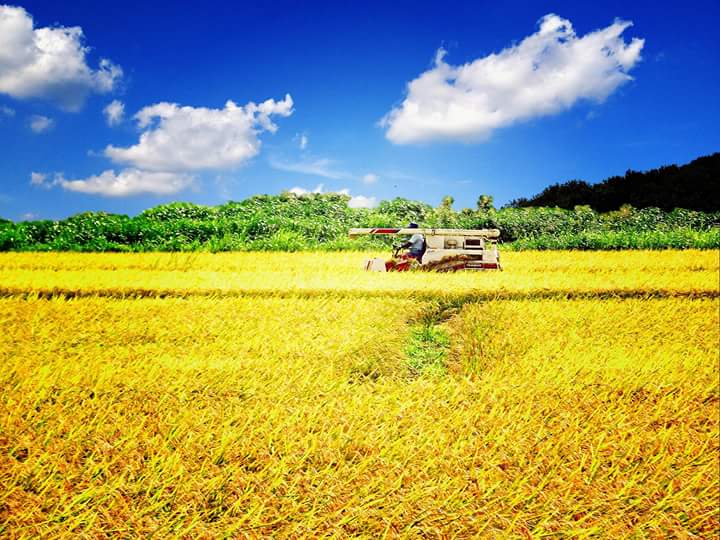 In the middle of October, colors of mountains in Japan change to the golden.
Colors of trees in the mountains change to the red and the yellow, and rice fields with ripe golden ears
tremble in the wind.

These ripe golden ears have rices inside.

The rice harvest, a base of the Japanese culture, starts this season.
We can check how the rices are important for Japanese.

Ripped rices are covered with the brown husk.
If we pick it, the well known white rice will be shown.

This rice covered with the brown husk is called Genmai (brown rice), and this one is
called Hakumai (white rice).

The rice isn’t only for steaming to eat, but also it can be Japanese seasonings like sake, soy sauce,
and mirin (a kind of sweet sake).

Even the straw and the brown husk are important materials for the life.

At first , the long straw like a brother of the rush grass has uncountable ways to use.
If it’s weaved like a straw hat, it can use as a container to save the rice, a hat, a coat,
and Japanese sandals.

Sometimes, it’s used for materials of the roof and the wall as a string.
When it covers boiled soy beans, it becomes natto.

And if it’s mixed into the earth when it becomes too old, it can be a manure.
Husks can be used as packing materials to save harvested fruits in the autumn, and also be a manure
by making it to be a charcoal.

A brown part puts on the fresh brown rice is called bran, and it contains Vitamin B1 and Vitamin B6.
The bran doesn’t taste so good, but if we put water to make it creamy and pickle vegetables and fishes
in it, it can be delicious and good nourishing Japanese pickles because nourishes in the bran move to foods.

To use the rice plants as daily utensils and foods is a traditional wisdom for everyday life in Japan,
and the Japanese culture consists of it.
When you pass through the rice field, please look it closely.