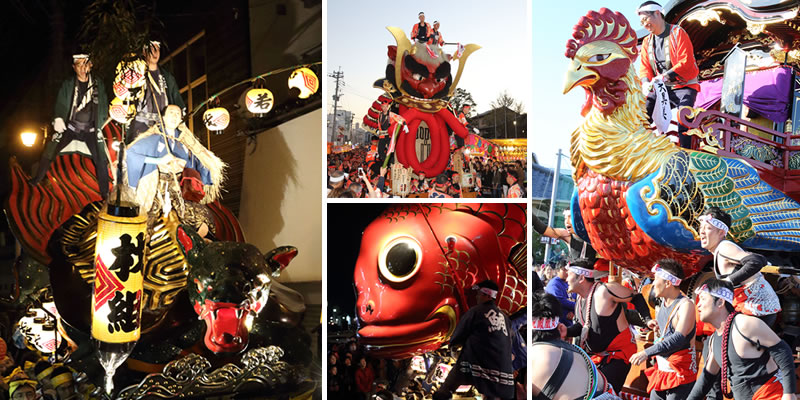 On the pattern made of clay, “Hikiyama” is made by piling 200 Japanese papers with good levels,
applying a Japanese lacquer on it, and finishing with gold and silver foils.
There are 14 Hikiyama and the total weight is more than 2t. Each Hikiyama are named Akashishi (red lion), Aoshishi (blue lion), and Hiryu (flying dragon), and “Karatsu Kunchi” is a festival held in the Karatsu Shrine in Karatsu city, Saga Prefecture, from 11/2 to 11/4 every year.

Hikiyama walk through the town with shouts.
This is widely introduced to abroad, so that more than 500,000 people are around during Karatsu Kunchi
and this is the largest event in Karatsu.

While men powerfully perform with Hikiyama, women prepare several things like
“Kunchi foods”
at home. Women in Karatsu prepare for Kunchi for several months.
They finish a general cleaning and re-papering the paper sliding door in the Japanese room before Kunchi.
It’s very busy duties so that they say
“we can’t see Hikiyama properly during Kunchi”.

Kunchi foods are various glorious foods, and its main is an uncut boiled fish named
“Ara (deep sea bass)”
that is more than 60cm.
Amazingly, some families prepare foods for 300 people even if any amount of people visit them.

It’s necessary to make friends in Karatsu to enjoy various foods in the beautiful Japanese room
with the re-papered paper sliding door.
Kunchi foods are for people who received “Invitation”, and also it’s a pleasure to visit friends
and eat them.
There are peals of merry laughter on the tatami.

This town is active with the brave Hikiyama, and there are warm spirits of hospitality and various foods.
You can see the charms of Japanese traditions in Karatsu Kunchi