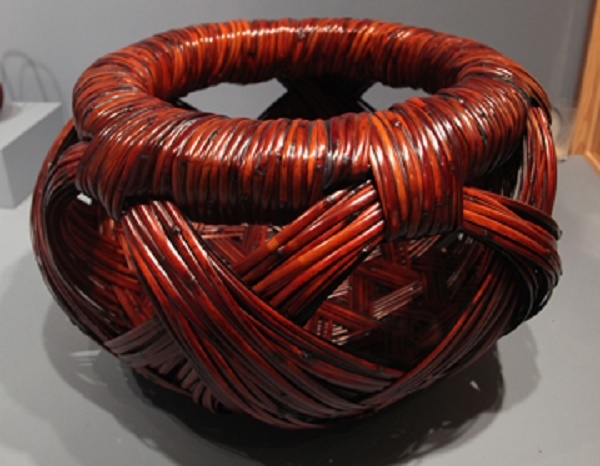 The bamboo craftwork developed early because of rich materials.
The Bamboo, that is strength and elastic, is loved because of its characteristic, that is able to tear up
and weave with various sizes and thicknesses, and its simple color, so that it has long history processed in various ways.

Recently, the bamboo craftwork is known by only people who do the old traditional culture like
Sado (tea ceremony) and Kado (flower arrangement) in Japan.

But over the sea, representing the U.S, it’s well known as an art and people used to decorate them
with pictures and sculptures.

Noboru FUJINUMA, who is a bamboo craftsman living in Otawara city, Tochigi Prefecture, is designated as
“Living National Treasure”
because he has techniques that are high artistic value.

More than 90% of sales of his works are the U.S. In Metropolitan Museum of Art in New York,
the special exhibition is held from June, 2017 to February, 2018 that is to introduce
“Japanese bamboo craftwork”
from 19 century to now.

Mr. FUJINUMA landed in New York for this exhibition, he explained the characteristics of the bamboo
and performed tearing up the bamboo equally thin.
The Japanese traditional culture is exhibited easier to understand by combining the tatami floored
Japanese room and flower arrangements, and a big object, that is three meters height, is set up at the entrance.

On the other hand, the bamboo craftwork looks attractive in the tatami that is also
a Japanese traditional culture.

Even the tatami is being known in the world.
Now, the Japanese traditional culture and craftwork is being across the sea and collecting attentions.