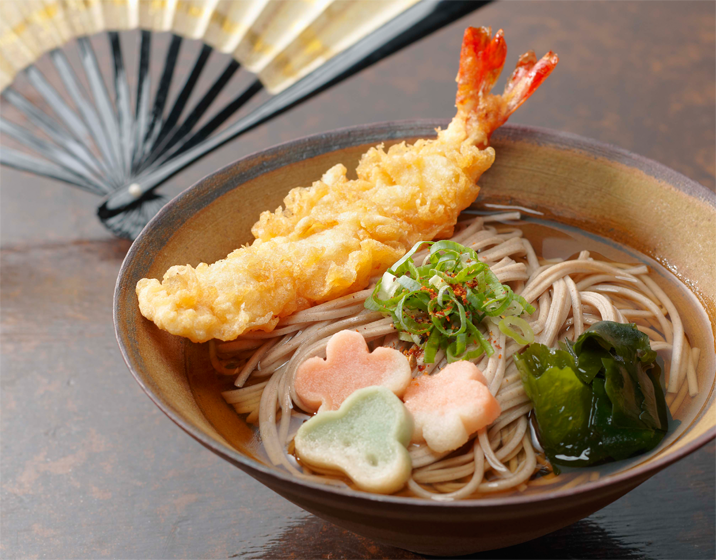 Soba is well known in Asia and Europe.
In Japan, it’s said Soba that is mixed up with water and cut into noodle.

It became noodle-like in sixteen centuries, and then, it became a fast-food by quick boiling and
quick eating in the Edo Period.

Soba by a ball of dough is called “Sobagaki”.
Soba is fulfilled with Rutin, Vitamin B1 & B2, and it’s Gluten free so that it’s well known
as a healthy food.

In Japan, usual Soba is “2-8” that means 20% of wheat flour is mixed up to soba as a connection.
If you need perfect Gluten free, choose 100%, please.

Well, there is a day to eat Soba in Japan.
It’s the New Year’s Eve.

When the prawn is heated, it becomes forming round and looks like old people, so that
it’s said the symbol of long life.
And then, it’s licks. In Japanese, licks are said “Negi” and it’s similar word of “Negirau (means appreciate)”.

It’s a Japanese joke to play on the sound of words as a luck.

By the way, where can we eat Toshikoshi Soba (year-crossing soba)?
If you cook it by yourself, you can buy it in any supermarket.

It’s only for New Year’s Eve.
Of course, any Soba, like Zaru Soba (Soba served on a bamboo draining basket with dipping sauce) or Soba
in hot soup, can be “Toshikoshi Soba”.

If you order “Prawn-tempura Soba”, mostly there are licks so that you can eat lucky
“Toshikoshi Soba”.
Wherever you eat it, it’s a point to eat on New Year’s Eve.
We wish you to have a great year in 2018.
Have a good New Year.