“Meigetsu-in Temple” in Kamakura, a famous spot of blue hydrangeas with Japanese atmosphere “Enlightenment window”, more charm to the tatami, and “Gessho-in”, a tea room. 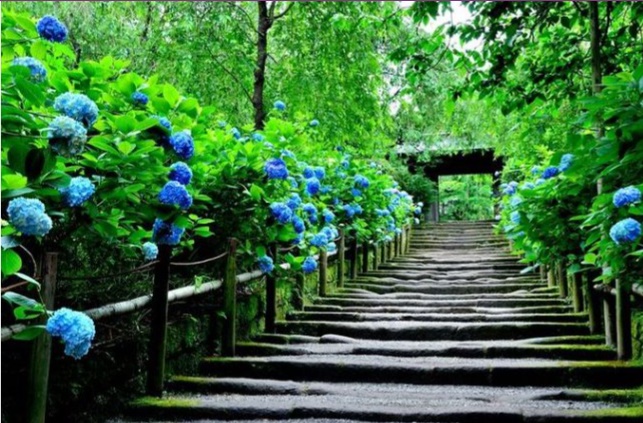 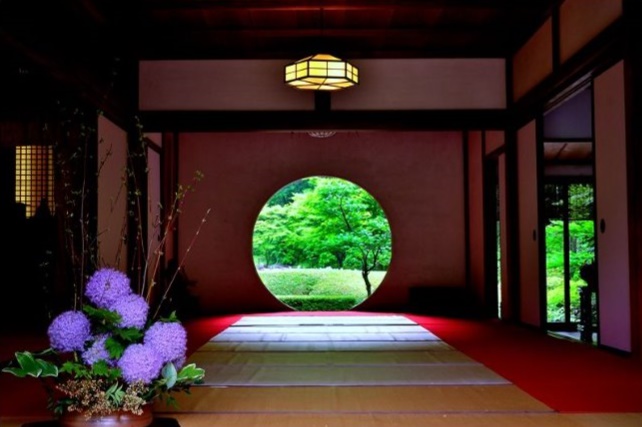 Kamakura, an ancient city, is crowded with a lot of tourists, both from Japan and abroad through a year.
It prospered as the central place of politics because there was the Shogunate in Kamakura.

There are a lot of temples and shrines, and a lot of visitors visit there since the end of the Edo Period.

From now, Ajisai (hydrangeas) are blooming nicely.
Though Kamakura has several famous spots of hydrangeas, the most famous spot is “Meigetsu-in Temple”,
where locates 10 minutes in a walk from Kitakamakura Station.

Meigetsu-in Temple is also called “Ajisai Temple”, and there are 2,500 of hydrangeas;
it’s only “Hime Ajisai”.
Flowers of Hime Ajisai are only blue.

A lot of tourists visit during the hydrangeas season to see clear and beautiful blue, called
“Meigetsu-in Temple blue”.
On holidays, solid stone stairs on the approach can’t be seen because of crowdedness.

So, it’s recommended to visit there first thing in the morning.

Another famous spot in Meigetsu-in Temple to see like hydrangeas is a round window called “Enlightenment window”.
This window, locates across the majestic tatami, expresses “enlightenment” and “truth”.

The garden from this round window is usually closed.
But on June, the season of full bloomed hydrangeas and 3,000 of irises, and the season of autumn leaves,
it’s opened.

Also Gessho-in, a tea room in Meigetsu-in Temple is a recommending places.
While seeing seasonable flowers, you can enjoy the Japanese tea time with a green tea and Japanese confections.

Hydrangeas in Meitetsu-in Temple are more beautiful when it becomes wet by rain.
It’s a tourist spot to go with Japanese atmosphere when you stroll an ancient city, Kamakura.