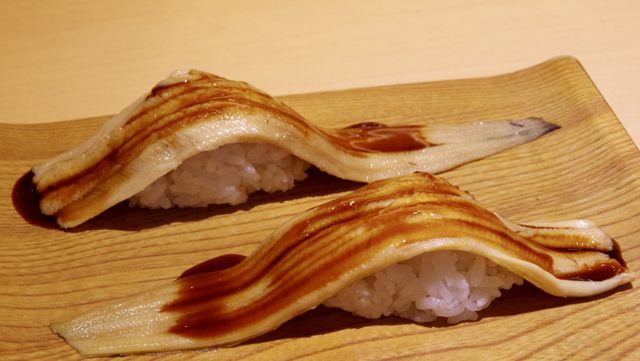 However, it was popular in Edo that easy foods to eat for people including craftsmen.

In Edo, there are various food stands.
Soba, tempura, and sushi…all have small schemes to eat easily.

Tempura was on a skewer so that easy to eat, and sushi had a lot of rice; its size was multiplied twice to three.
If you eat one or two of them, you’ll be full like eating a hamburger.

It was the end of the Edo Period that soba, sushi, and tempura became expensive foods.

Well, sushi in the Edo Period has another character.
It’s boiled, grilled, and pickled in vinegar to be good condition without a refrigerator.
Toppings are fishes and shells from Tokyo Bey.
Each one is seasoned to make use of fresh tastes.
It was called “works”, and Edomaezushi chefs competed their skills each other.

From now on, the seasonable topping of Edomaezushi is congers.

Congers are slender, and it looks like eels.
Its differ from eels is low fat.

Its taste is elegant if it’s boiled soy sauce and sweet sake, grilled without seasonings (Shirayaki), or
fried to make tempura, so that it was very popular for Edo people who loved simple tastes.

In Tokyo, there are restaurants to eat traditional Edomaezushi on the tatami space, so you can enjoy it differs from the common sushi.