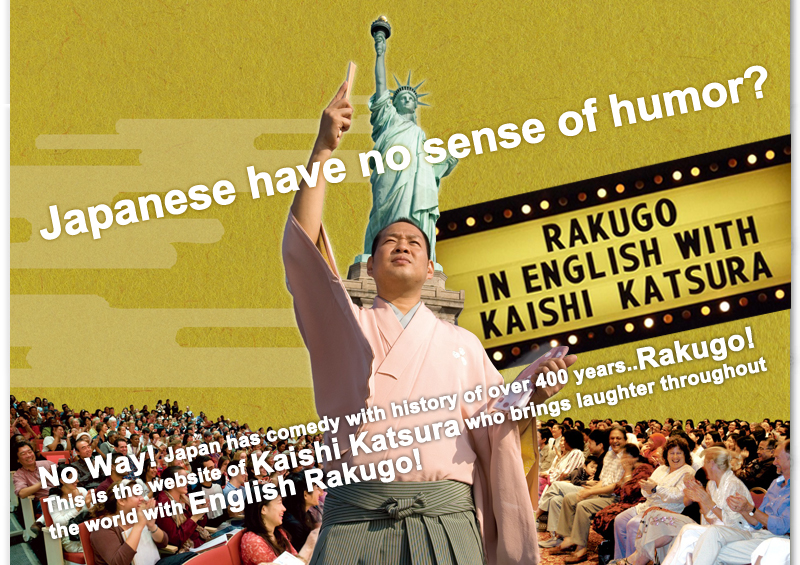 Do you know a Japanese traditional art from the Edo Period, “Rakugo”?

If you see Rakugo for the first time, you would feel strange.
There is a small stage with cushions on the center of the stage, and a person wearing kimono sits there.
This person keeps sitting and talking something long.

He / she talks stories instead of jokes like a stand up comedy, or social ills.

Some of you may feel that it’s difficult.
But people laugh with it.
Rakugo stories are laughing stories.
The main characters in classical stories, standardized in the Edo Period, are Edo people.
These are about misunderstandings, failures, upsetting, laughing, or sometimes impressed by friendships
and love between partners or families.

Most Edo people lived to borrow a small room.
There were an entrance, a small kitchen, and the tatami room.

Standard lives of people are talking through Rakugo.

Rakugo storyteller performs all characters by alone;
outlines and character’s lines are performed with hands actions and voice.
Items are only a handy fan and hand towel.

A handy fan is used as chopsticks at a scene of eating soba noodles, a writing brush, a tobacco pipe, a letter,
or a plate.
A hand towel is also used as various things by opening or rolling.

The storyteller is just sitting and talking though, people are attracted by the story.

One of the biggest characters of Rakugo is having “Sage (the punch line of the story)” at the end.
Sometimes it may be a just simple thing or a silly joke though, this makes us laugh at the end.

Could you be interested in Rakugo?
You can read translated Rakugo stories in text, but you want to hear it from Rakugo storyteller, don’t you?

There are a few English Rakugo storytellers in the act.
English Rakugo was started by Katsura Shijaku in 1980’s, and his students like Katsura Kaishi has succeeded.

They perform classical Rakugo stories from the Edo Period and new Rakugo stories for the present day.
You can see them in movies.
But if you check the date and time of the real, you can enjoy it by the real.