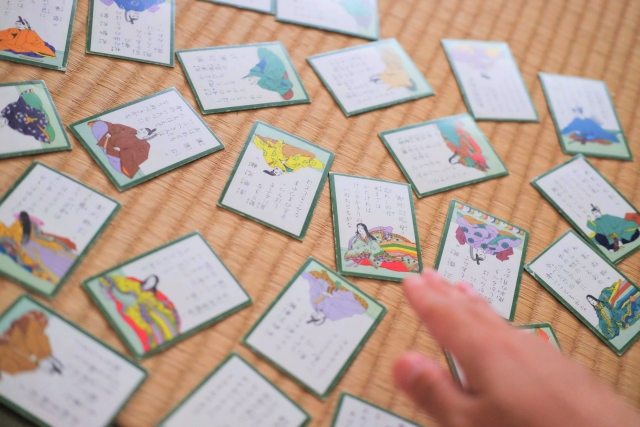 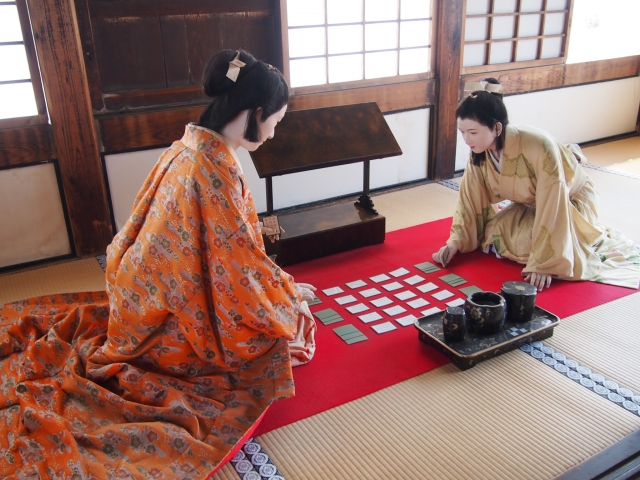 Have you watched “Chihayafuru”?

It’s a story about brushing up skills of Hyakunin Isshu by high school students, and it was made into an animation and movies from a manga.

As for most Japanese people, Hyakunin Isshu is for a play on the New Year’s Day or assignments to memorize them in schooldays.
So, most young people know it, but don’t like it.
However, everything has changed by “Chihayafuru”.

Hyakunin Isshu is cards of one-hundred poems by one-hundred famous poets.
These poems consist of 5-7-5-7-7-syllable, and it’s called Waka, an original poem in Japan.
People should phrase the world in this syllable.

In Hyakunin Isshu, one poem has two cards.
Waka is written on one card with a vivid picture, and only Shimonoku is written on another card.

When we play with it, Shimonoku should be spread randomly.
One person reads poems written on cards with pictures, and other people should get collect Shimonoku cards.

If we remember poems in Hyakunin Isshu, it’ll be easy to find Shimonoku.

Waka was born in the 8th century, and formed the current style in the 10th century.
Among them, Teika FUJIWARA, a noble in the 12th century, chose the best of Waka, and these were named Hyakunin Isshu.

The first poem in Hyakunin Isshu is composed by Emperor Tenji who lived in the 7th century.

After then, a card game was introduced from Portugal in the 16th century, and Hyakunin Isshu game was formed from this game and shell matching game.

In the Edo Period, printing techniques were improved, and Hyakunin Isshu with beautiful pictures were expanded, so that it played in the New Year’s Day and used for children to remember poems.

Hyakunin Isshu is a Japanese culture that completed by several hundred years.

Another point in Hyakunin Isshu is the tatami.
Its uneven surface makes easy to get cards.

Of course, the tatami can be a cushion while kneeling.

Even Hyakunin Isshu is marvelous to learn high level Japanese language.
Though it’s difficult for Japanese people, why don’t you try it?