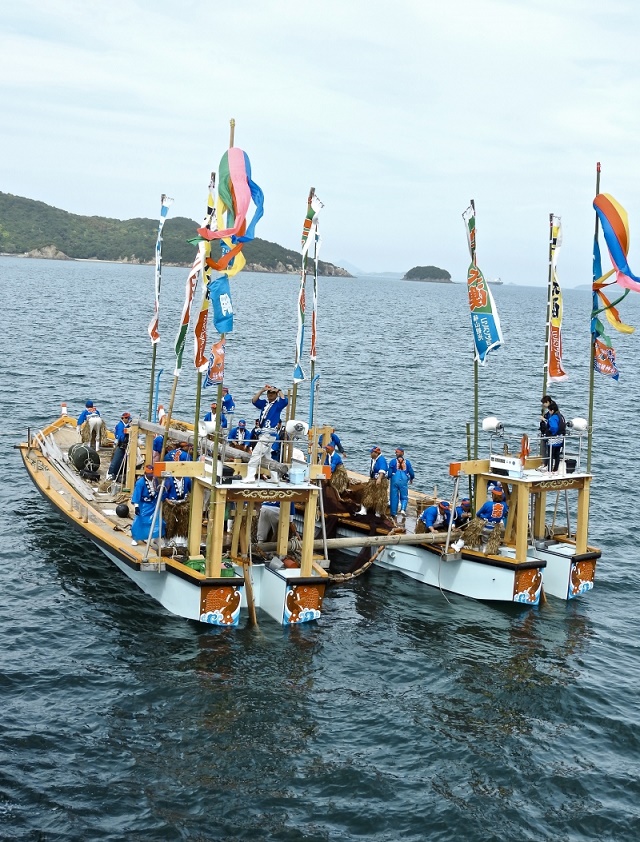 Fukuyama City in Hiroshima Prefecture has the most healing port town in Japan, called “Tomonoura”.
Tomonoura was appeared in Manyoshu, the oldest Japanese poetry’s collection in Japan, and it is in front of the Seto Inland Sea, remains the nostalgic and tasteful townscape, and has old streets from the Edo Period.

The illustrations that drew former townscapes can act as the current map, and there is no place other than Tomonoura.
A lot of tourists from both Japan and abroad visit here, that attracted by this nostalgic atmosphere.

During this season in Tomonoura, a traditional fishing way called “Kankoutaiami” is a view point.
Beautiful and delicious sea breams are caught in Tomonoura, and the same fishing way has been succeeded for 380 years, since the Edo Period.

It is known as the tradition in Tomonoura at the beginning of the summer.

It is “Kankoutaiami” that seeing this powerful fishing way in close by getting on the ship in act to catch a lot of sea breams.
There is no place to adopt this fishing way, succeeded since the Edo Period, other than Tomonoura.
After catching fishes, it is unique to be able to buy them on the ship.

It can be packed to bring back, and furthermore, it can be proceeded to deliver if you wish.
It is good to experience this fishing way from the Edo Period in Tomonoura, isn’t it?

After enjoying the traditional fishing way, we recommend you to visit historic sites while enjoying the historic atmosphere of the town.

“Taichourou” in Fukuzen-Ji Temple, in front of the Seto Inland Sea, was built in the Edo Period, and it is a building designated as the national historic site.
You will be attracted by the marvelous view, seeing from the tatami floored room that was opened to the Seto Inland Sea.

On the other hands, there are view spots like “Masuya Seiemon’s house”, a tasteful folk house that Ryoma Sakamoto, a hero in the Edo Period, stayed, “Ohtake’s house”, a brewery of “Houmeishu”, that is a popular product in Tomonoura that has more than 350 years of the history, and so on.

In Tomonoura, everything is so picturesque here, why don’t you feel the atmosphere as the port town and enjoy the healing time?